The experience of captivity was a “life within a life” for many Americans. With the primary objectives of combat removed from them, boredom, futility and helplessness became enemies to be combated as tenaciously as the Nazis. After interrogation, most prisoners would be assigned to a permanent camp based on rank, and then transported to environments that varied widely mainly based upon location and the state of the war.

Americans were typically housed adjacent to, but separately from, the British and the other Allied prisoners in accommodations that ranged from wooden barracks to concrete cells with a capacity of 8 – 40 men. A meager daily ration of food was provided and was supplemented with provisions from the Red Cross, which were often communally cooked on stoves in the barracks.

Attempts to prevent becoming “wire happy” included setting up classrooms and offering courses in what became known as “barbed wire universities.” Some camps contained libraries of up to 15,000 volumes (everything but spy and escape stories) and prisoners maintained a list of all of the books they read during confinement. Sporting events carried out with equipment supplied by the YMCA, such as boxing matches, track meets, football and baseball games were also very popular. Camp theaters produced shows—comedies were quite popular—and even printed tickets and playbills outlining the casts. In addition to these recreational and educational occupations, trying to escape was a way to occupy time and to feel a sense of duty fulfilled. Staying connected and alive could be a full-time pursuit.

Beginning in 1943, the War Prisoners Aid of the YMCA—dedicated to the spiritual, educational, and recreational needs of POWs—supplied blank journals for inclusion in Red Cross Aid packages bound for Europe. It was reported that they sent enough journals for every American POW, although later numbers suggest that only 25,000 were printed. It is unknown how many actually made it into the hands of prisoners, or how many survived the camps, forced marches and the intervening years. Wartime Logs came with a cover letter containing the instruction to let the book be a “visible link between yourself and the folks at home.” The journals were coveted, bartered and traded. They created a precious forum in which to list frustrations and to sketch out hopes and desires.

Walter Boychuk served with the 491st Bomb Group, 8th Air Force as a navigator on the B-24 “Holiday Inn” when it was shot down on a mission over Le Havre on 13 August 1944. He received and maintained this diary in Stalag Luft I. Gift in Memory of Walter Boychuk, 2009.063

Bruce L. Worrell served with the 85th Infantry Division’s 359th Infantry Regiment and was captured in Italy in May 1944. Worrell kept this journal during his time as a POW and as part of Kommando 1711, a work detachment based out of Stalag IIB. Gift in Memory of Bruce L. Worrell, Sr., 2011.297

Edward Shaw served with the 319th Glider Field Artillery Battalion, 82nd Airborne Division. After participating in the invasion of Normandy and the campaign in Northern France, he was captured on 4 November 1944 and maintained this journal in Stalag VIIA. Gift of Phyllis Shaw, 2001.065

Joseph Veronick served with the 392nd Bomb Group, 8th Air Force as a Radio Operator when the B-24 “Crew Chief” was shot down over Bremen, Germany, on 13 November 1943. He maintained this journal while held prisoner in Stalag XVIIB. Gift in Memory of Joseph J. Veronick, 2012.055

Willard C. Miller served with the 96th Bomb Group, 8th Army Air Force as a waist gunner on a B-17 lost in a mid-air collision during a flight to bomb oil refineries in Brüx, Czechoslovakia. He maintained this journal in Stalag Luft IV, where he also served as the prisoner representative, or “Man of Confidence. ” Gift of the Miller Family, 2012.388

Olaf Lambert was a Royal Air Force rear gunner on a Lancaster bomber shot down during the raid on Dieppe on 19 August 1942. He lived as a POW for two-and-a-half years in Stalag Luft I, where he kept this journal. Lambert’s journal provides an Allied complement to those of the American prisoners, corroborating tales of confinement. Gift of Olaf Lambert, 2001.361

Major Newton Cole was the Division Chemical Officer with the 29th Infantry Division. He was captured near St. Lô, France, thirteen days after the invasion of Normandy. He maintained this journal while imprisoned in Oflag 64. Gift of the Men of Oflag 64, 2006.130.002

One of the primary tasks of the Red Cross is the concern for the health and well-being of prisoners of war, and among other things, they are responsible for overseeing matters of food, medicine and mail. The American Red Cross played a vital role in POW life in WWII, particularly in Europe where they were permitted to distribute more than 27 million parcels to US and Allied prisoners of war. These packages were assembled in a mass effort by more than 13,000 volunteers in distribution centers around the United States. POWs were intended to receive one Red Cross parcel per week. The packages, containing nonperishable foods like biscuits, raisins, coffee, powdered milk and canned beef and fish, along with amenities like cigarettes and soap, were received by American POW representatives in the camps and collected for fair and orderly disbursement. Special Christmas parcels were sent with holiday treats as well. As war conditions worsened for the Germans and bombing of German supply lines increased, the receipt of aid packages dwindled. POWs captured late in the war reported very little contact from the Red Cross. These care packages and the supplemental nourishment that they provided were a crucial part of POW survival, helping to sustain both body and soul during captivity. 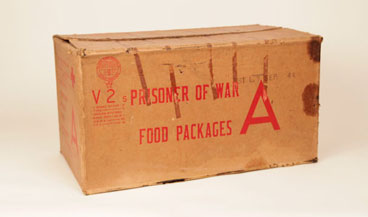 This box would have contained four smaller packages with amenities like cigarettes and soap, along with nonperishable foods like biscuits, raisins, coffee, powdered milk and canned beef and fish. 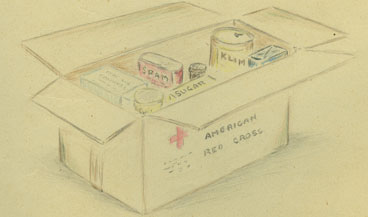 Page from Memoirs of a Prisoner of War by George S. Vasil. 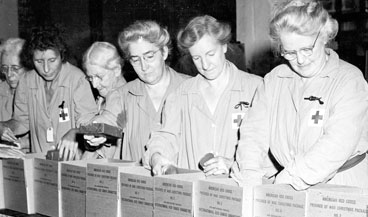 Red Cross volunteers in Philadelphia pack boxes for shipments to POWs. These packages were assembled by more than 13,000 volunteers in distribution centers around the US. 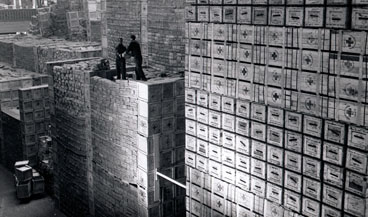 Red Cross warehouse in Switzerland from where food is distributed to POWs throughout Europe.